“Let us never forget that salvation is in charity”
Suzanne Aubert

During the next 10 to 20 years, the number of people coming to the Soup Kitchen increased, and their reasons for coming were virtually the same – too little money, poverty, being down and out, or being in a state of desperation or loneliness.

The proposal for the motorway by the Wellington City Council necessitated the Soup Kitchen being rebuilt a short distance away in Sussex Street. The new building was blessed and opened by Bishop Snedden on 9th November 1973. The three-storey complex housed the Sisters of Compassion, a crèche and the Soup Kitchen. So ended an era of serving soup at 22 Buckle Street. 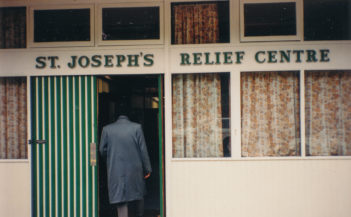 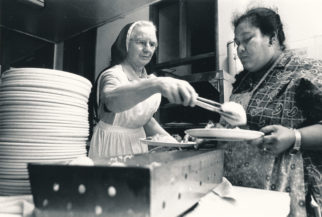 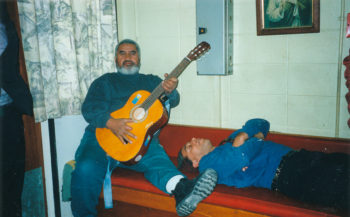 Guest of the Soup Kitchen, Philip, with his guitar

A conversation with Francis Xavier

Over the years, many lovable characters have visited the Soup Kitchen. One of them was Francis Xavier. ‘Sister, I do my best but it gets me…I’ve been drinking all my life.’ One very cold morning when he arrived at the Soup Kitchen, blue, shaking with the cold, Sister Sebastian asked him: ‘Where did you sleep last night?’ ‘Mount Street Cemetery.’ ‘Cemetery!’ said Sister Sebastian. Noticing the look on her face, Francis said, ‘Sister, it’s not the dead you need be afraid of, it’s the living.’