“A grateful Heart is the joy of everyone who comes in contact with it.”
Suzanne Aubert

The daily menu of soup and sandwiches continued until 1962. The involvement of the St Vincent de Paul Society brought about a significant change in service. Breakfast remained the same a bowl of hot soup, but in the evening soup was replaced with a hot meal. Previously, the Society had issued meal vouchers to anyone requiring them, but unfortunately, they were frequently exchanged for alcohol. Seeking a better way of providing meals, they met with the Sisters of Compassion at Buckle Street to form a partnership to benefit both groups and improve the service. The St Vincent de Paul Society took responsibility for purchasing the meat and vegetables, and the members helped the sisters to serve the evening meal, that was prepared and cooked by the sisters. From June that year, a hot evening meal was provided for all who came.

Over the first ten years of the joint venture, around 90,000 meals were served. A good number of the St Vincent de Paul Society members who served the evening meal included professional people. Many of them stayed and had dinner afterwards.

St Joseph was still the main provider, and no one has ever been turned away because of lack of food.

With the return of men from the Vietnam War, some of them were coming to the Soup Kitchen on a regular basis. Many had been afflicted with substance abuse. 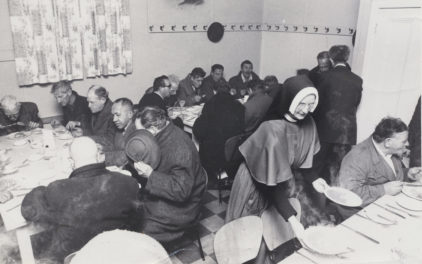 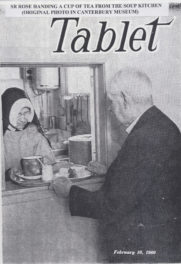 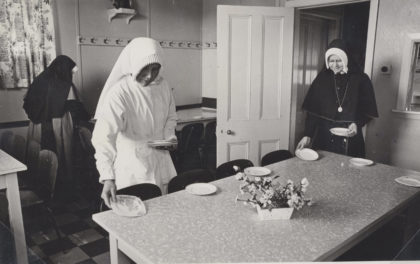 A letter written by a grateful visitor

On Good Friday, after having spent the night in the Basin Reserve I was horrified to find a number of elderly men sleeping under a minimum of shelter. When the rain stopped and the dawn began to break, men could be heard coughing from all around the park. I was forced to sleep there because of the lateness of the Picton Ferry but it appears that these were sleeping there because they were homeless.

In the morning, my friend and I visited your relief centre and was greeted by a hot bowl of soup. Although I am a Protestant, I felt the warmth and goodness that radiated from the kitchen. In an age of cynicism and trouble, it is comforting for one as young as myself to witness the purity of Christianity as was shown by that Sister. Men who were obviously very lonely were sitting opposite to each other and did not talk as they drank their soup but the Sister welcomed each with cheerfulness and handed out hot cross buns as they left without proselytising to them but because of her attitude they must have been mindful of the day and what it truly stood for.